Most of the residences see the forest view as well as the view of recreation area. And the high blocks have a panoramic view extending along Marmara that also sees the forest area.

All residences are directly accessed via elevators and stairs from their own parking garages. All flats are enabled with additional storage facility in ground floors.

Most of the residences see the forest view as well as the view of recreation area. And the high blocks have a panoramic view extending along Marmara that also sees the forest area.
All residences are directly accessed via elevators and stairs from their own parking garages. All flats are enabled with additional storage facility in ground floors.
Settlement of green valley mansions was constructed around Ümraniye Tepeüstü location in the valley between TEM highway and state forest on an area of 117.000 m2.
The main reasons why the project is called as Green Valley Mansions are that it is adjacent to forest area from north-west part, 10% of around 200.000 m2 land was allocated to structuring in consideration of the areas assigned to recreation and buffer green areas of highways, and that it is surrounded with a green area of 150.000 m2 within itself.

The settlement is surrounded with forest from north-west and the conjunction of TEM highway from south-east direction; it is in a position of ''urban oasis'' which can be accessed with an entry road with single control that rules out a bad development around. At the start of the area, which can be entered by passing under the highway, there are markets, social facilities, a school and a mosque. These can be utilized independently from residence settlement area and thus it becomes possible to separate the settlement with a controlled entry. Residence settlement areas, green areas, sport and recreation areas are connected with a clear highway and pedestrian road network. The roads were designed mainly as pedestrian roads and with low speed. Other than temporary parking lots and manoeuvre places, automobiles were completely taken to the underground parking garages. Garages were designed as 2 automobiles to fall to the share of every flats or units. Apart from main pedestrian roads, there are also alternative pedestrian, walking and runways to get all around the settlement through the greenery and that is connected to the recreation area locally from perimeters. In the base of the valley, there is a linear recreation area starting with social facilities and club building, extending along the sport facilities organically through the valley, that takes the shape of a pond around the cafe and tea garden, which is equipped with child playgrounds and botanic park. Residence blocks were organized gradually as with 18, 16, 13, 10 floors and 6, 4 floor types.
High blocks were located in the highway side of the valley, thus it was ensured that the settlement could be perceived and identified from long distances. In high blocks, building forms were used to emphasize the difference of the settlement and symbolize and make it distinguished. The height of buildings were designed so as to decrease through the bottom of the valley and with a concept that is parallel with the location of the valley, in this way and by arranging the positions between the blocks, visual relation of all blocks with the recreation area was ensured.
Flats were generally planned so as to be with 4 or 5 rooms between 185 m2 and 240 m2 gross, and enabled with enriched usage opportunities with the saloons over 50 m2, with kitchen usage areas up to 20 m2, having two baths and a small toilet; with baths and parents bedrooms. As an alternative to the usage and maintenance problems of single villas, “apart villas” to consist in garden duplexes and roof duplexes, which have the characteristics of a villa by their potentials were designed as “urban villas”, which are easy to procure and maintain. These building types were especially designed as twin blocks with two separate entries in the form of villas. All residences are directly accessed via elevators and stairs from their own parking garages. All flats are enabled with additional storage facility in ground floors. The settlement consists of 635 residence units in total with 108 urban villas, 381 apartment houses and 146 flats in residence block which was attached thereafter. 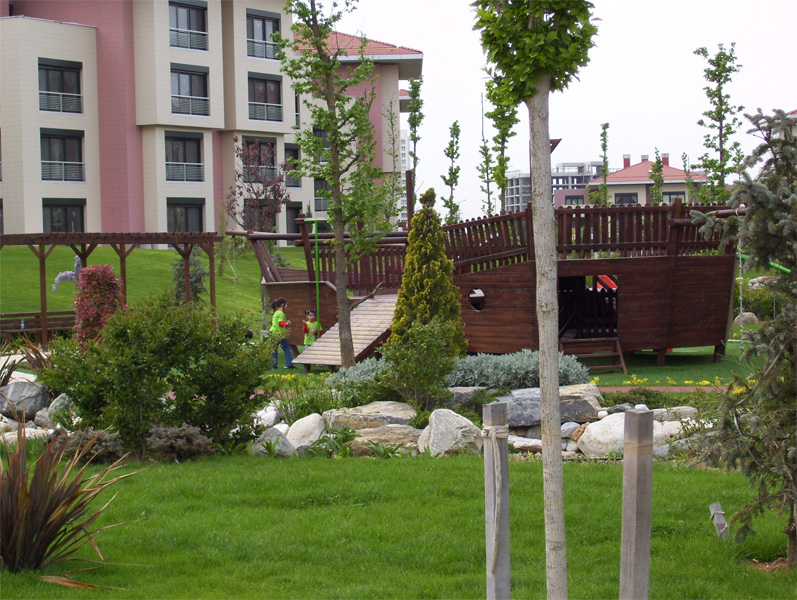